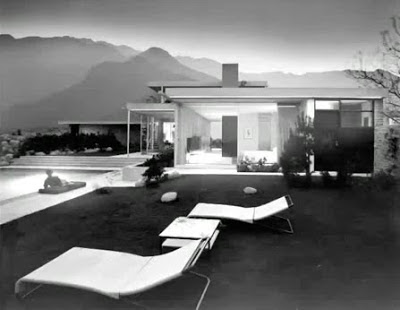 Michael stopped me this morning before I dived into work to watch a documentary on Julius Shulman via Netflix instant. Oh….I am so thankful he did…it was captivating.

From Amazon: “Narrated by Dustin Hoffman, VISUAL ACOUSTICS celebrates the life and career of Julius Shulman, the world s greatest architectural photographer, whose images brought modern architecture to the American mainstream. Shulman captured the work of nearly every major modern and progressive architect since the 1930s including Frank Lloyd Wright, Richard Neutra, John Lautner and Frank Gehry. His images epitomized the singular beauty of Southern California s modernist movement and brought its iconic structures to the attention of the general public. This unique film is both a testament to the evolution of modern architecture and a joyful portrait of the magnetic, whip-smart gentleman who chronicled it with his unforgettable images.”

I will tell you the truth, I didn’t know the name Julius Shulman, but as soon as they started showing his photographs…I recognized them. The film and his photography are impactful and inspiring. Extremely glad Michael persuaded me to take the time to watch it. It was well worth every minute and I know I will be floating on daydreams of beautiful architecture all day.

I love the movie Willy Wonka and the Chocolate Factory. And I think Glee’s version on this song is amazing! 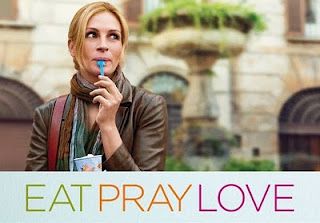 The night before I left Minnesota 2 of my Aunts, a cousin, my Mom and my sister had a girls night out. We went to see Eat Pray Love. There is this fancy movie theater there with a VIP lounge and exclusive seating. We arrived and had drinks before in the lounge and then ordered food and drinks that they deliver to us in the theater. It had seating with skinny tables between each seat for the food. All the food came with cloth napkins and nice plates. Not paper.

I am one of these people that can take the movie for a movie that stands alone without the book. And vice versa a book doesn’t need to match the movie. So I went in with an open mind and new that they would never be able to capture the intensity of the book. I wanted to enjoy the movie just for itself and I did!

If you are wanting to see it and want it to be exactly like the book – don’t see it. It will probably disappoint you. If you understand that they can’t capture the intensity of the emotions book due to some of it is just not possible to me on screen but also because of length of the movie – then go see it. I think Julia Roberts was really good person to play Liz Gilbert. And I think they captures many wonderful moments of the book. Many of my favorites parts or quotes got in the movie.

Such as this one…this quote is from the section on Italy – Chapter 25 (Bead 25) page 75. Liz is talking about all the changes the Augusteum has went through. But I like what the message of the quote….

“It is merely this world that is chaotic, bringing changes to us all that nobody could have anticipated. The Augusteum warns me not get attached to any obsolete ideas about who I am, what I represent, whom I belong to, or what function I may once have intended to serve. Yesterday I might have been a glorious monument to somebody, true enough — but tomorrow I could be a fireworks depository. Even in the Eternal City, says the silent Augusteum, one must always prepared for riotous and endless waves of transformation.”

Entertainment Weekly had an article on Eat Pray Love the week it came out. And one thing I found out was Richard Jenkins who plays Richard at the Ashram talked to the real Richard before going to film and said it was the best 45 minute phone call he ever had. But he went on to say that he was sorry that Richard died before being able to see the movie. That made me sad to think that Richard is gone. He died of a heart attack.

And last but not least…OH MY Javiar Bardem….SO SEXY. He definitely made the movie better.

So I liked the movie. I would see it again. And I will want to have it when it comes out on DVD.

So we are home now and busy with work. I have been suffering with a migraine that I have had for a week. And I know it is just because I am crashing hard.

When I was at my parents back in April, they watch a lot of reality tv and one of those shows is American Idol. I had maybe seen one episode the first season and none since.

Anyway…lately people are posting links that I follow that have American Idols from this season. And they are videos I like so posting them.

This first one is Lee DeWyze Hallelujah which is one of my favorite songs and he did a good job.

This next one is from the other top contender from this season Crystal Bowersox and this is from before she was on the show. It is to promote a website for street musicians. I guess the “video, produced, directed and edited by Mark Schimmel was shot in one day and features eight street musician groups singing in eight different Chicago locations. The project, which contained over 48 audio tracks and multiple visual elements, took over 9 months to complete.”